“Lipstick On Your Collar” heads to Blackburn! 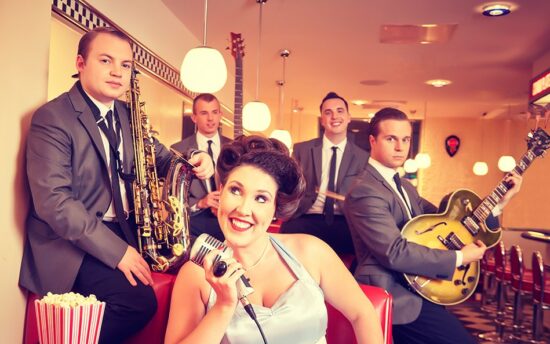 Tickets are selling fast for Lipstick on Your Collar as it heads to Blackburn on Saturday 14th March 2020. As seen in the West End at The Leicester Square Theatre, Lipstick On Your Collar is set to lift the roof off at King Georges Hall with their spectacular show, playing an array of classic hits from the golden era of music.

From the birth of Rock ‘n’ Roll through to the Beat Group sounds of the British Invasion and beyond, expect tight harmonies, excellent vocals and plenty of dancing in the aisles.  The show will include hits from the likes of Connie Francis, Buddy Holly, Brenda Lee, Jerry Lee Lewis, The Beatles, The Ronettes, Cliff Richard, Cilla Black, Sandi Shaw and many more musical legends.

Taking inspiration from the iconic fashion and style of the time and performed by a full live band, the two hour show will take audiences on a fun-filled musical journey through the years from Rock Around The Clock and the birth of Rock ‘n’ Roll in 1955, through to the Beatles and the resulting British Invasion in 1964, with accompanying nostalgic video footage throughout.

Lead singer, Nicola Seeking-Smith, talked about the show, “We’re really excited to be bringing Lipstick on Your Collar to Blackburn; Our band contains some of the country’s top musicians and singers, all of whom are massive fans of the era so we’re extremely proud of the show. The 50s and 60s are such an iconic period of time and we hope that our portrayal of this fantastic music will have people singing along and dancing in the aisles!”

TICKET PRICES: £21.50 (A transaction fee will be charged per booking.)