Legendary band The Blockheads in Blackburn this March

Starting out as the band behind Ian Dury, the Blockheads are a legendary outfit that has grown in stature from the early days of the Stiff tour in 1977, right up to the present day. 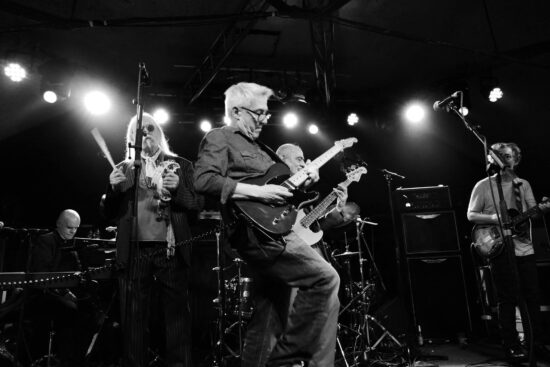 They have a loyal legion of fans of all ages and have rarely been off the road since they formed in 1977 to promote Ian Durys’ album ‘New Boots and Panties’ on the first Stiff Records tour of the U.K..

The Blockheads have continued after Dury’s death, contributing to the 2001 tribute album Brand New Boots and Panties, then releasing Where’s the Party (2004), Staring Down the Barrel (2009),and the live album 30 Live At the Electric Ballroom (2008) to mark the 30th anniversary of New Boots and Panties!!

Along with some new material you can expect to hear, “Hit Me with your Rhythm Stick”, “Wake Up And Make Love With Me”, “Reasons To Be Cheerful (Part 3)”, “What A Waste”, “Clevor Trever”, “Sweet Gene Vincent” and many more from the illustrious back catalogue.

The Blockheads are fronted by Derek ‘The Draw’ Hussey, and Chaz Jankel, Norman Watt-Roy, John Turnbull and Mick Gallagher still remain from the original band.  The current line-up is augmented by John Roberts on drums and a rolling line up of saxophonists that includes Gilad Atzmon and Dave Lewis.

TICKET PRICES: £19.50 (A transaction fee will be charged per booking.)